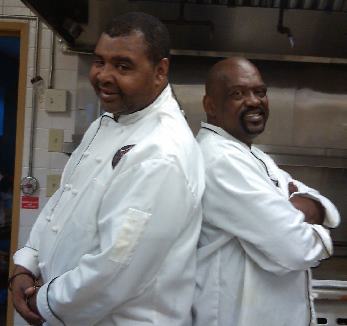 Brother 2 Brother started in 2007 as a one time party event.  James and Randy have been known in private circles for their culinary skills for many years and were hired to do private events as personal chefs. They were hired to do a senior brunch, an event for 80 guests, to honor seniors in the church and the community.

The catering was so successful that many were asking where their restaurant was located. They became known as the best kept secret in the Inland Empire.  It was an easy transition to start the catering business, James formally filing the company papers in 2010. Randy served as a consultant for the company. The name Brother 2 Brother was Randy’s idea and he decided to join the team with James.  They are known for working with the client to create unique menus that are custom designed to fit the theme and to enhance the celebration.  Both have a passion for fine dining and service excellence. Together they have over 40 years of culinary experience.

Chef James’ passion for cooking is long lived, starting as a child in his mother’s kitchen. The first meal he cooked was pancakes and sausages. He often took over the kitchen, cooking dinner for the whole family around the age of 12 under his mother’s supervision. The chef began his professional career at the age of 19, managing a local Fish N’ Chips restaurant “Chesley Fipps Fish and Chips” and since has studied under master chef Beverly Salsky, Successful Restaurateur, and personal chef to many affluent in Canada and from Food Networks Emeril Lagasse, an American celebrity chef, by watching his show daily for years.

James continues to elevate his skills by attending culinary classes and exploring new recipes each week, which are reflected in the B2B menu. James’ second passion is singing and has become known as “The Singing Chef”. He is a classically trained singer and has been featured on several recordings. He is a member of the Riverside Lyric Opera Company but his passion is for Jazz music. Chef James sings with his wife Cookie (Anna Cameron) who is also a member of RLO and they are featured artists in the Cotton Club Revue, an annual presentation.

Chef James also shares his culinary passion by giving back to the community, often you will see Chef J volunteering in a kitchen to feed the homeless Veterans and many others in need. Chef J also mentors and guides young people in the culinary field. 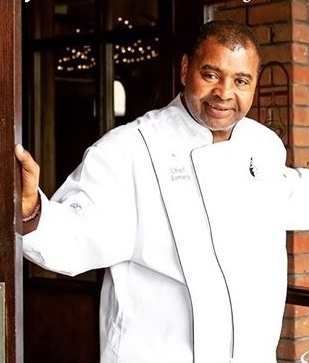 Randy, the youngest brother, is a graduate of Le Cordon Bleu Academy- San Francisco. Randy served as the head chef for the University of California Riverside for 24 years.

Randy has a passion for music, Jazz and R&B (he prefers listening not singing) and BBQ. He worked for years as a DJ for special events. He is well known in the Inland Empire as the Grill Master for the mouth watering BBQ that B2B has created over the years.

He has served our country with honor and distinction logging over 1100 combat hours with the 335th "Assault Helicopter Company" in the central highlands of Vietnam between 1967 and 1968.  August also possesses an FAA Airline Transport Pilots License for airplanes, seaplanes and helicopters.  Chef Swanson is a graduate of the prestigious Pepperdine University School of Business in Malibu, California, and of the U.S. Army A.M.O.C. flight test program.  He is the Founder and President of Warbird Connection which brokers vintage aircraft and rare “Warbirds” and founder of "Serve-one Inc".

A highly decorated combat pilot and is an accomplished chef. After working with chef James on several projects to feed the homeless Veterans he has joined the B2B team.  Chef August is very instrumental in the B2B mobile catering services. 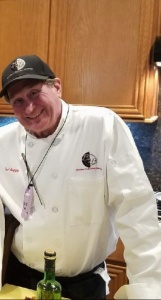